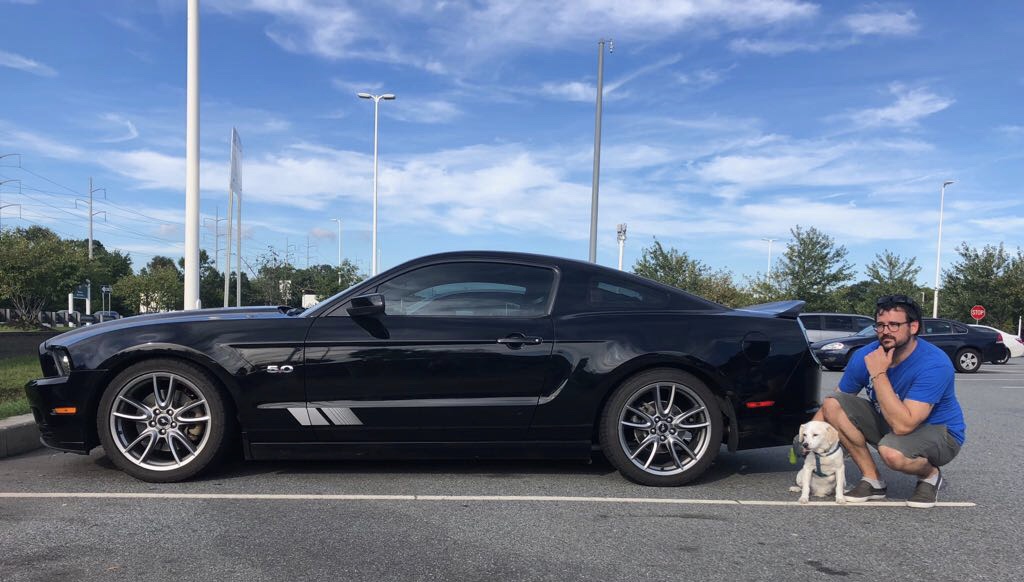 5 years ago today, I bought my 2014 Ford Mustang GT, AKA the DudeStang. It was the first brand new car I’d ever bought, and the first fun/cool car I had owned since I sold my TransAm in 2008 (unless you consider a 1995 Nissan Pathfinder cool). When I was getting ready to move to the Washington area, after three years living in New York and not owning a vehicle, I knew I was going to buy a car. Initially I was planning on taking a more semi-sensible route and buying something used, and had been looking at SN95 Mustang Cobras and C5 Corvettes, and at one point really considered buying a 1st gen Cadillac CTS-V (2007 or 2008). I was also very interested in the 2003-2004 Mach 1 Mustangs. I test drove a Cadillac very similar to the one pictured below, and it was a fun car, but it had pretty high mileage and I had some hesitation about buying a car with high miles. 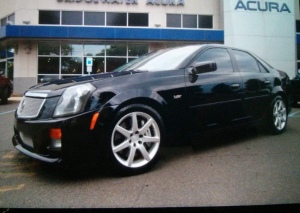 Fast forward to July 4th, 2014. I’d been living in the DC area for maybe a day or two. In search of an Independence Day American muscle fix while also continuing my car search, I gathered up a friend and brought him with me to a couple of dealerships for a quintessentially American holiday. First we stopped by a Chevy dealer and took a 2010 Camaro SS for a spin. I was familiar with the LS family of engines having owned an LS1 TransAm but I had not yet driven a 5th gen Camaro. My friend had not been around a lot of fast cars so he got a little freaked out the first time we may or may not have got a little sideways. After that, he seemed to get settled in and I can confidently say we both had a blast. 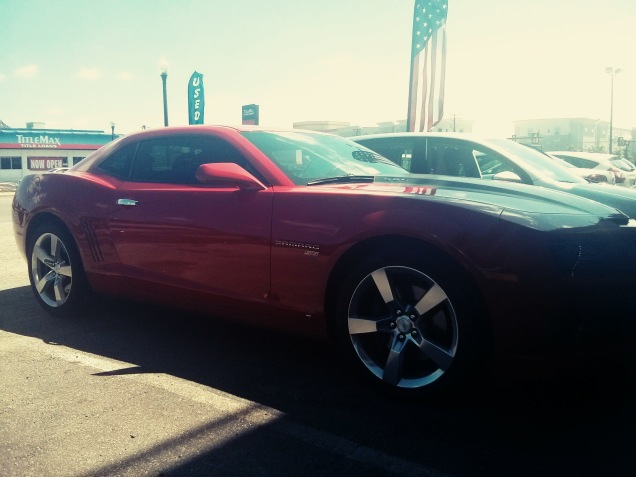 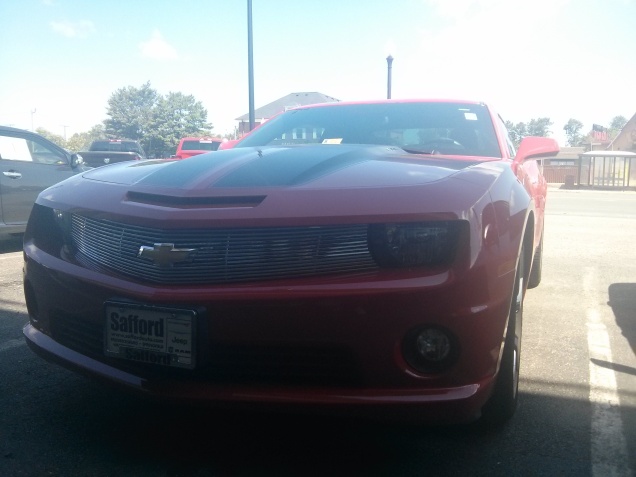 The Camaro was fun in a “I haven’t driven a fast car in a few years and its hard to not have fun in a rear wheel drive, 8 cylinder, 6 speed manual” kind of way. I wasn’t a huge fan of the looks though (I think it had some sort of cheesy aftermarket grille set and it was red, which just doesn’t do it for me) and the driving experience felt a bit sloppy. If I recall correctly, this particular Camaro had a decent amount of miles on it. Also, driving a 5th gen Camaro is sort of like how I imagine it is to drive a tank, at least in terms of the visibility, which is really bad. Both the front and back windshields are narrow and the side door windows are narrow and also sit pretty high due to the styling of the car.

Our next stop was a Ford dealer to check out the newest (at the time) Mustangs. The S550 (2015+) had not arrived on showroom floors but I was a huge fan of the S197 body style, the last version of the retro styling, and I had yet to drive the new 5.0. The salesman picked out the black 2014 premium GT convertible pictured below. It shouldn’t have been particularly surprising that a brand new car, 4 model years newer than the Camaro, would feel better but it really did, in every way. I loved the looks, the way it felt while driving, the acceleration, the seating position, and it really lived up to the hype that had started generating in my head back in 2010 when it was first announced the 5.0 was coming back. At the time I test drove the Mustang, I was still considering buying the CTS-V. Once I drove the Mustang, I was no longer interested in the Caddy and I pretty much knew I had to have a 5.0. 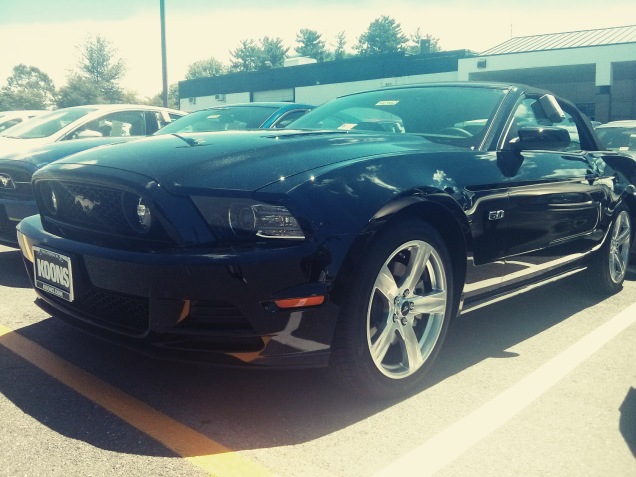 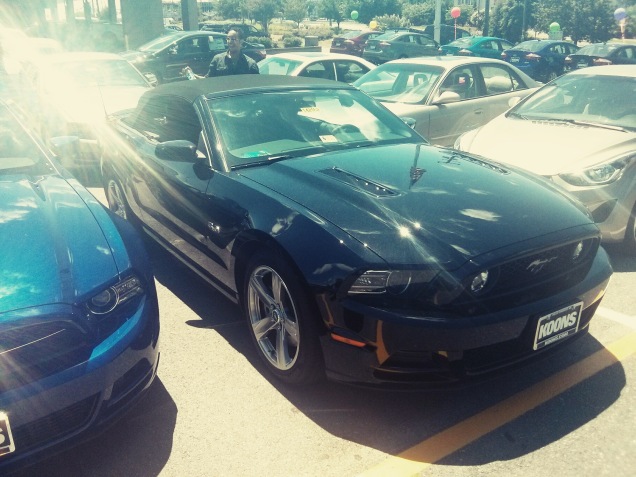 Around the time I was first looking at vehicles, Mustangs were obviously towards the top of the list because I’ve been a fan for years but had never owned one. I was also looking online at used Chevrolet Corvettes and Nissan 370Zs but neither of those have a back seat and being a dog owner, I had to have a spot for my best bud Jack… 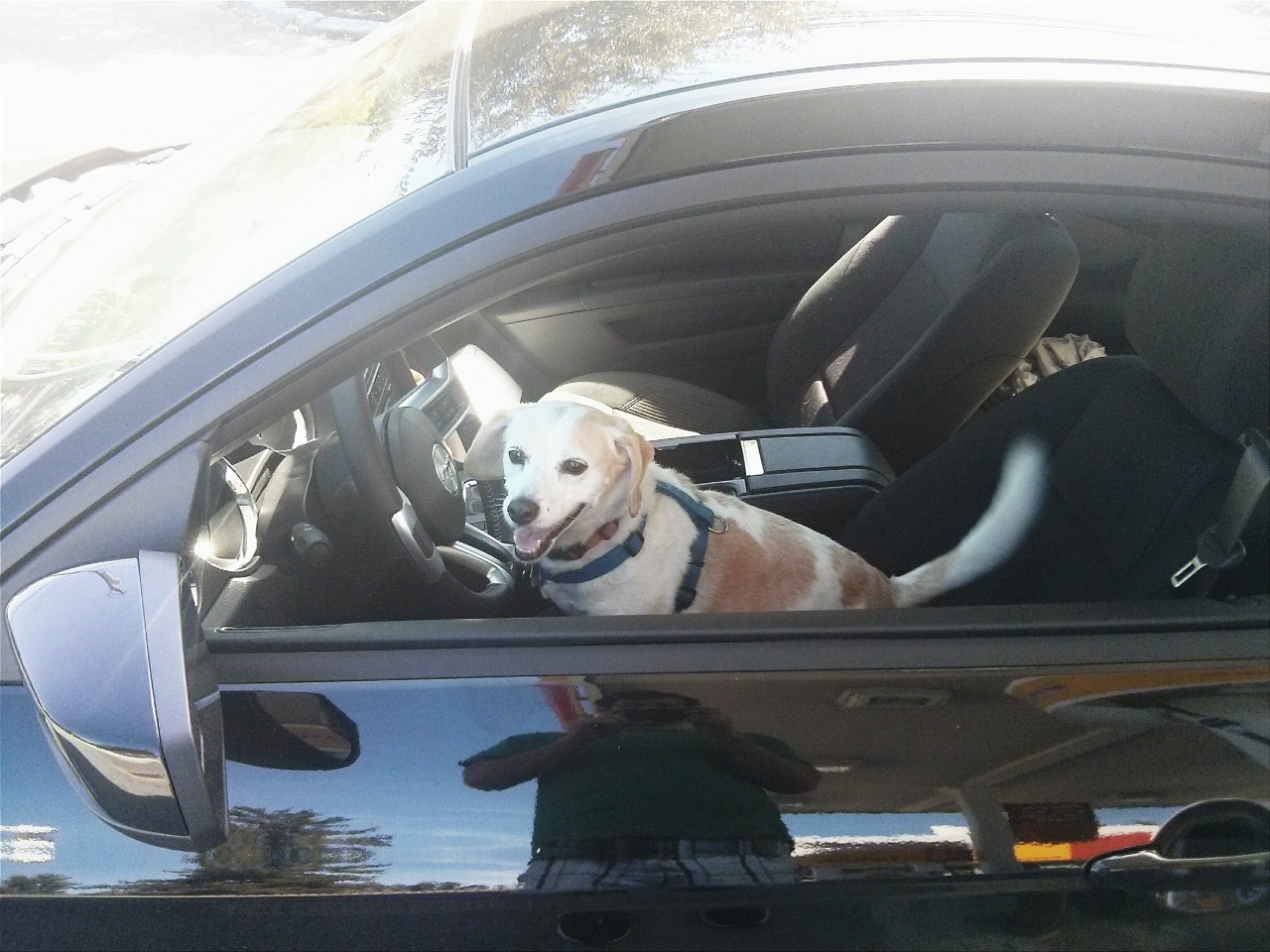 Sometimes he likes to ride in the front seat though

Back to the test drive day – I enjoyed the perks of the premium GT but I wasn’t interested in a convertible and I knew the premium package added quite a bit to the cost. After some thought, eventually I concluded that my minimum requirements were the 5.0 and a six-speed manual transmission. I found a car online and went to check it out in person the next day. A few hours of typical dealership haggling nonsense later, I drove off the lot with a brand new 2014 Mustang GT, black on black, six speed manual, with no bells and whistles other than a power driver seat and Ford Sync. It was about as basic as you could get in a Mustang GT, but I was excited to be back in a fun car again, and to finally be a Mustang owner. 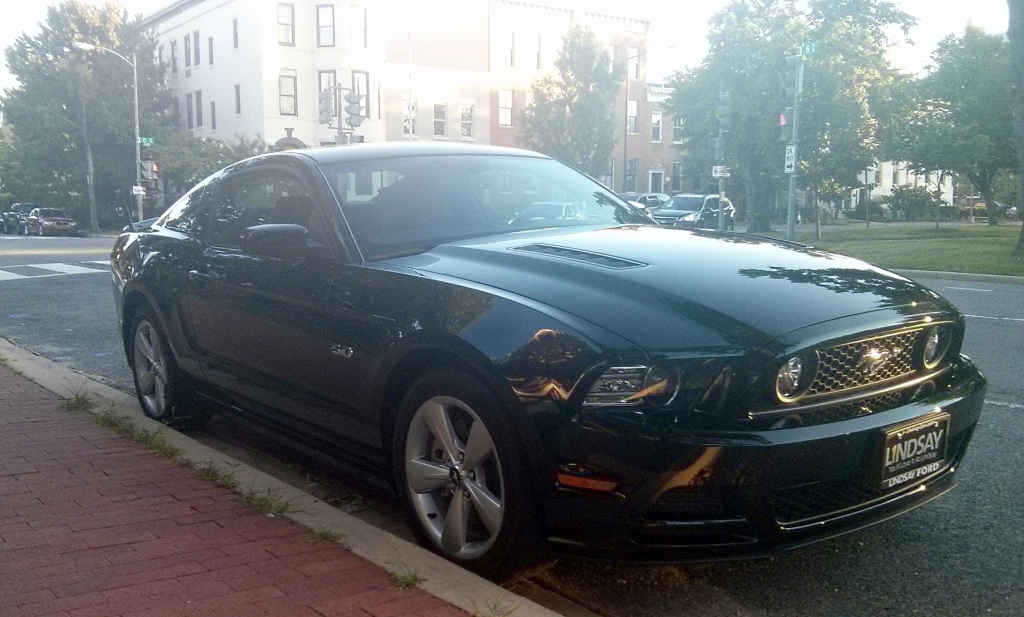 The DudeStang before she was the DudeStang, the first day I brought her home.

The nickname DudeStang came about somewhat naturally, after one of my first additions to the car: 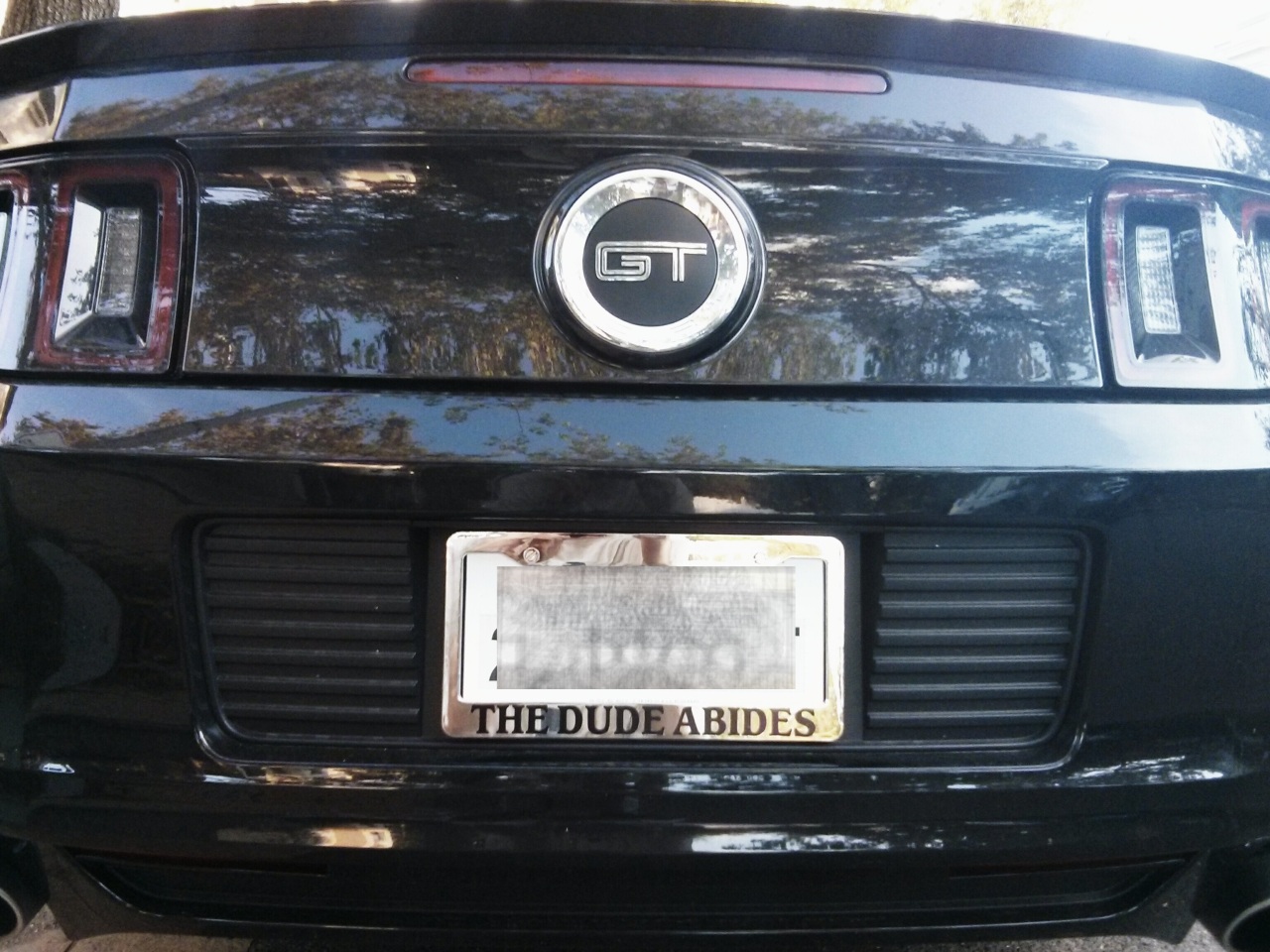 I have thought a few times in retrospect that financially, it would have made more sense to buy a slightly used Mustang rather than a brand new car but after all of the great experiences I’ve had since buying the car, I really have no regrets (except for not getting the Recaro seats, but that’s a story for another day). I didn’t have to worry about whether anyone else had abused the car, neglected it, or modified it any way that I might want to change. The only changes I needed to make were whichever upgrades or modifications I desired (and which my wallet allowed).

I’m a firm believer in the notion that cars are meant to be driven so it wasn’t long after I picked up the Mustang that I was driving it on numerous road trips. Since I moved to the area, I’ve taken public transit to my work and while I’ve used the car to run errands, I don’t have to drive it regularly so a significant portion of the miles I’ve driven have been on weekend road trips. In the last five years, here are some of the places it’s been driven – Woodstock, Vermont; New York City a dozen or so times; Rochester, New York three times; Philadelphia; Pittsburgh; Lancaster; the Poconos at least a dozen times; Savannah, Georgia; the Outer Banks, North Carolina (including a ferry ride to Ocracoke Island where we saw approximately ZERO dolphins – looking at you, Nikki); and in the longest trip to date, from Washington to Miami and back for my wedding, with stops in Charleston, South Carolina, and Melbourne, Florida, along the way.

These are just some of the longer trips and the car has been used for countless day trips in the closer vicinity as well. 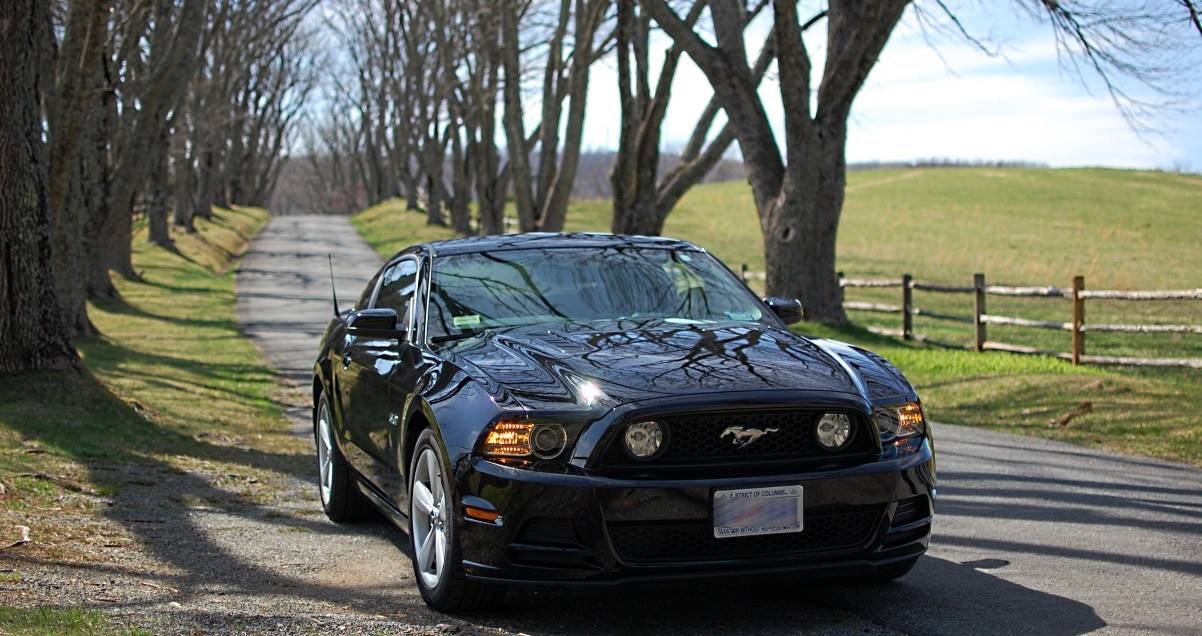 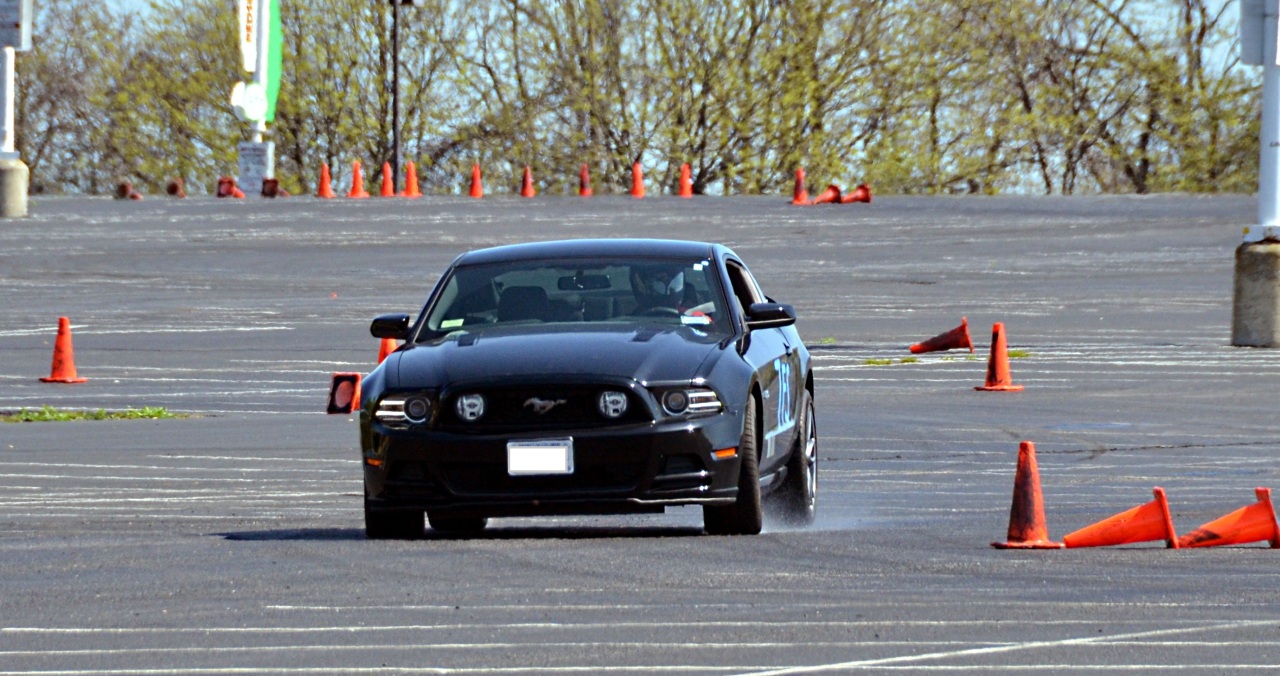 At my first autocross event in 2016 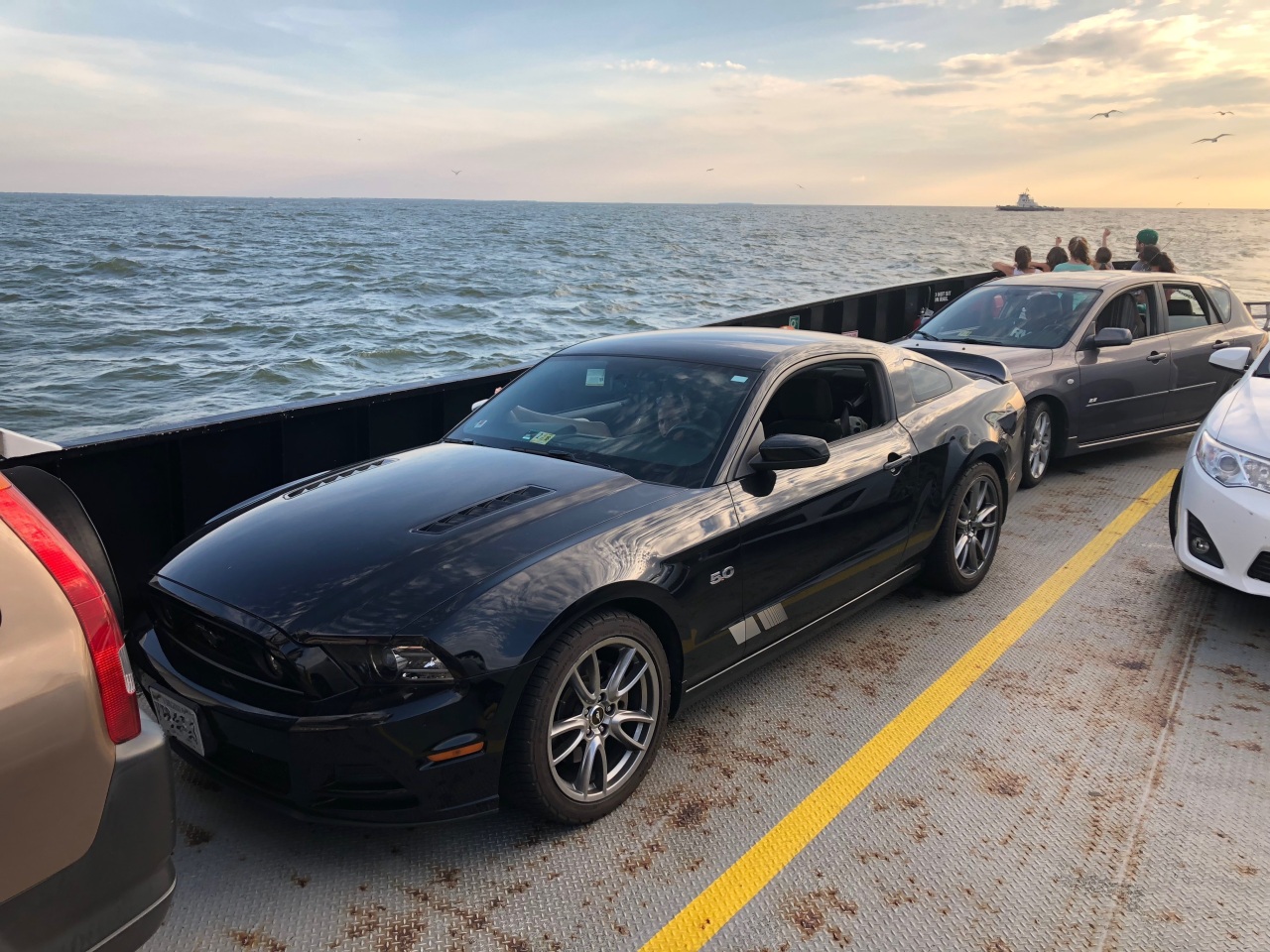 On the ferry returning from Ocracoke Island in the Outer Banks 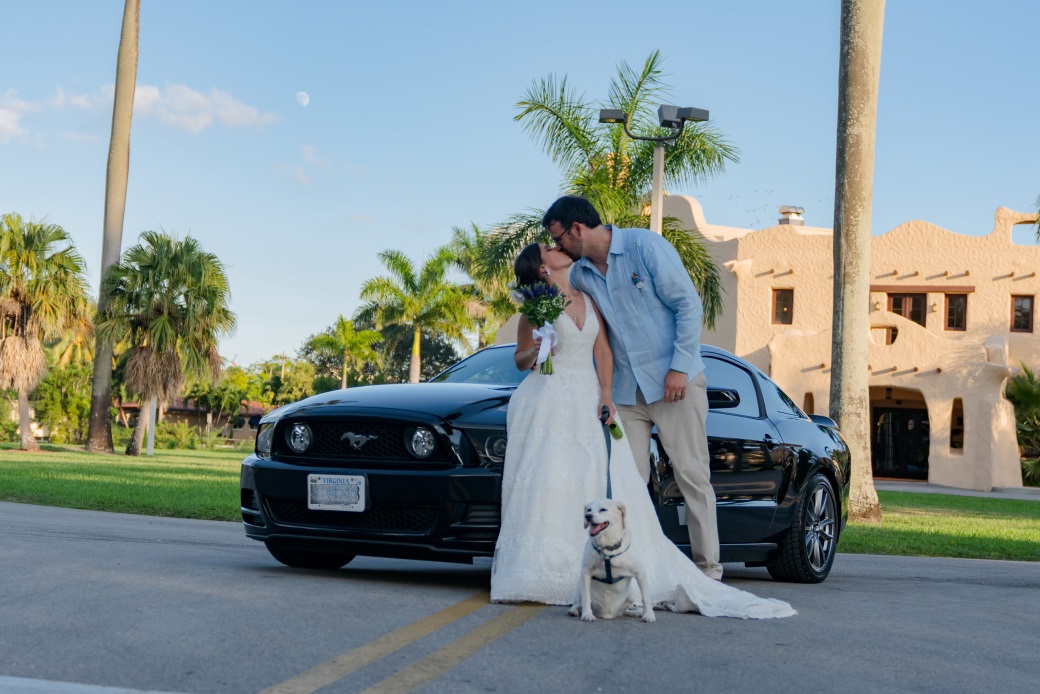 As I write this, I’m quickly approaching 50,000 miles on the odometer. Admittedly this isn’t a lot for a five year old car but again, it isn’t used for daily commuting and so many of those 50,000 miles have been accumulated on some of the most fun and memorable trips of my adult life. The DudeStang isn’t the fastest or quickest car on the road, but it is fast and it is quick. It isn’t the most fuel efficient but it has its moments, when I can resist the urge to put the pedal to the floor and keep it in 6th gear on the interstate. It isn’t the most practical, but I have managed to successfully transport some large items (stand by for a blog post on “practical Mustang” soon) AND carry four adults, my dog, and some luggage on a few occasions.

It isn’t a crazy, heavily built custom car, but I’ve made what I consider to be subtle, attractive, and somewhat unique exterior modifications, I’ve upgraded the suspension, and the exhaust sounds the way I want it to sound for now. I’ve got plenty more modifications I’d like to do on the car but it’s a slow work in progress. There are a lot of incredible cars on the road, many that didn’t exist five years ago, and the technology and performance available in showroom floors across the globe is unprecedented. If I do get the opportunity to own some of those vehicles, it will be in addition to the DudeStang, not in replacement of it. Five years later – every time I start the car, it puts a smile on my face. I still drive it just for the sake of driving it, even when I don’t need to go anywhere. I’m looking forward to the next 5 years, the next 50,000 miles, and beyond.