My wife and I recently had to say goodbye to our best friend Jack. I wanted to write something to honor his memory.

When I wake up in the morning and get ready to go to the gym, I find myself still instinctively handling my keys with caution to minimize noise. Even as he got older and he started to lose his hearing, Jack could always hear two things: my keys and bags of snacks. When I am about to leave the apartment in the morning, I have to remind myself there’s no need to leave the radio on or to leave the fan or AC on. I no longer receive a text message around noon from our dog walker to confirm the mid-day potty break. When I’m on my way home from work trying to quickly navigate my way around the endless horde of people walking too slowly, I’ve had to remind myself that I don’t actually need to rush home to make sure Jack is walked and fed. I have to remind myself that its OK to stop at Nordstrom Rack to look for a new pair of running shoes, or that its OK to stop by the library before going home. I’m still getting used to the idea that right after work, I don’t have to go straight home.

It hasn’t even been two weeks and I’m now realizing just how many of the habits in my daily routine have been influenced by Jack. When I see my wife’s purse sitting out, my first instinct is to grab it and double check it to make sure she didn’t leave the chocolate chunk granola bar in there that she undoubtedly forgot to eat earlier in the day. Tonight my wife and I were on our way home from meeting friends after work and she mentioned that she needed to pick up a frame from Michael’s. My first thought was “oh we’ll have to take Jack out first”, and then I have to remind myself he’s not there anymore. When I walk into our bedroom, my eyes instinctively move to the corner where his bed is, expecting him to wake up as I flip the light switch.

Jack was a Jack Russell Beagle mix. In 2002 my sister rescued him from a shelter she was working at in Colorado and he became one of our family dogs. I still remember the first time I saw him because he was standing on two legs like a circus dog. I remember thinking….this dog is bananas. He was full of energy and by most accounts, pretty crazy. Between him and our other dog Zack, Jack was definitely the dominant personality, always rushing to be first to whatever was happening, whether it was food or attention or getting out ahead of the walk. He was also very sweet and he absolutely loved people. He loved to give kisses, he loved pets and scratches, he loved to run around and play fetch.

Jack had an interesting aversion to conflict. I don’t think this is an uncommon feature because I’ve seen a number of dogs react in animated fashion when people around them get too loud or too aggressive roughhousing. Jack would do that – he’d bark and get in the thick of things if my siblings and I or our friends were getting a little too rowdy – but he’d also do it at the dog park. If other dogs got too aggressive or started fighting, he’d often run and get in the middle of them, barking at both dogs, almost like he was scolding them. It was pretty incredible to watch, especially since Jack was only 30 lbs and sometimes the other dogs would be significantly bigger.

I’m sure I have some older pics somewhere but this is me and Jack in 2004! 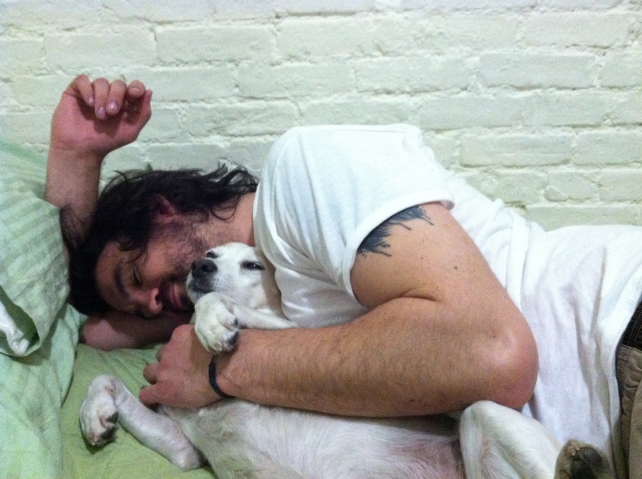 On a road trip to Vermont 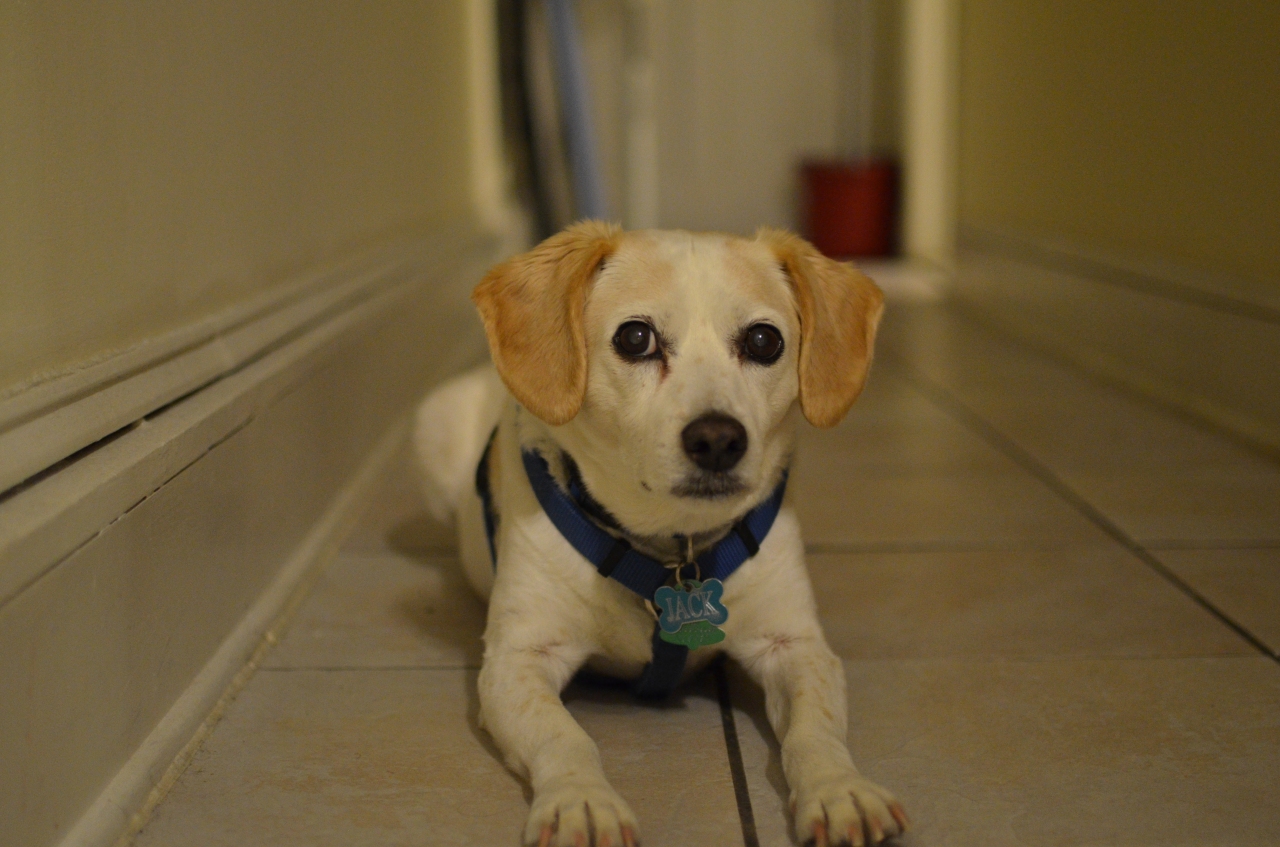 What are you looking at?

At Sakura Park in Manhattan 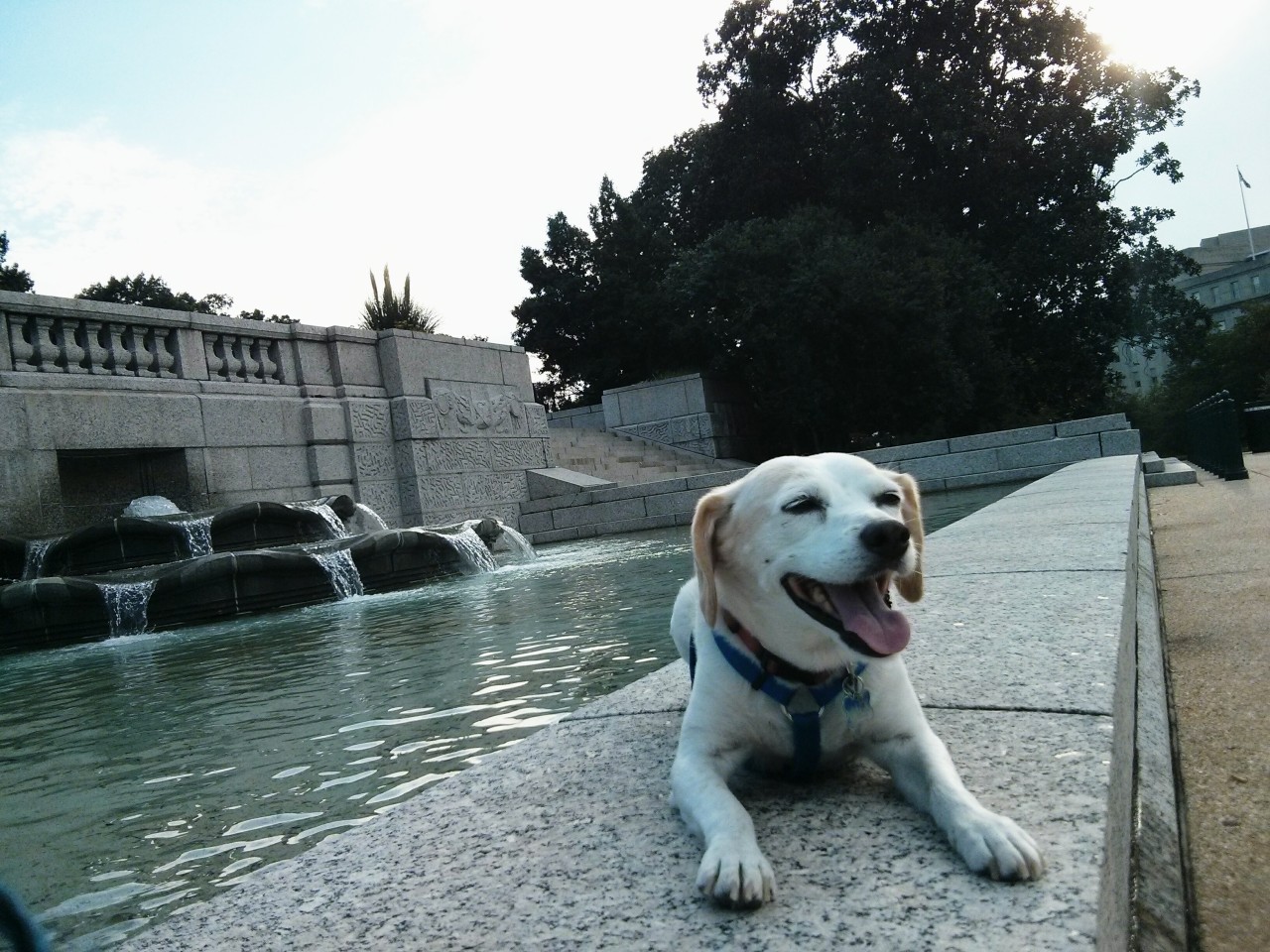 At Capitol Hill shortly after moving to the Washington area

Long story short, Jack eventually became my dog and moved with me to the east coast, first to New York, and then to the Washington, DC area. We did everything together. Even at age 11, Jack had a crazy amount of energy and we’d go on super long walks all over New York City. I’d wander block after block of Manhattan, taking photos, and Jack would be right there with me. He’d patiently wait while I took long exposure shots of the George Washington Bridge, and then as soon as I packed up my camera, he’d be ready to walk another 20 blocks like it was nothing. We’d take long walks in the morning, in the afternoon, and in the evening. He was always up for it. He even rode on the subway a time or two, before I learned he wasn’t supposed to. 🙂

Jack was super curious about the turtles in Morningside Park, NYC

Jack was the best road trip dog. He’d happily get into the car and quickly make himself comfortable, often he’d be sound asleep and snoring within minutes. Upon arrival at any destination, he’d hop out of the car with a smile on his face, ready to explore our new surroundings. In the last six years, we drove from New York to Colorado and back, including stops in Niagara Falls, Chicago, and Cleveland; to Vermont, Savannah, Charlottesville, Annapolis, Pittsburgh, Rochester, the Outer Banks, and Miami, among others.

Jack had an awesome time in Pittsburgh:

Jack made friends everywhere he went

Always up for a walk with new friends

The Outer Banks is a trip that stands out. Having spent most of his life in Colorado, Jack didn’t spend a lot of time around water. Any time I gave him a bath, he desperately tried to escape the tub. The first few times I took him to a lake, he was less than thrilled to be anywhere near the water. By all accounts, he wasn’t a water dog. In summer 2018, we arrived in Frisco, in the Outer Banks, where we stayed at a house on the water on Pamlico Sound. Unexpectedly, Jack just walked right into the sound – up to his chest, and he didn’t seem the least bit uncomfortable. And as if to prove that it wasn’t an anomaly, when we went to another beach, he walked in the water multiple times. Who would have thought that at age 16, he’d discover his love for the ocean? 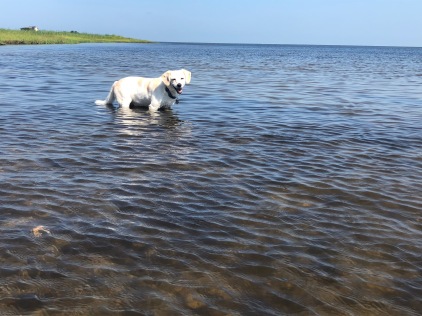 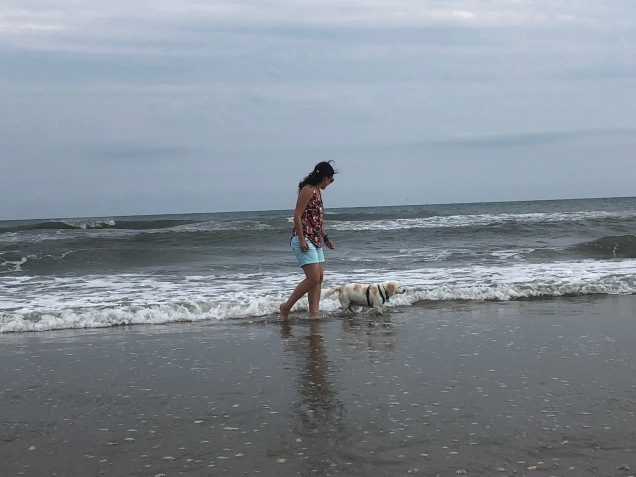 Jack could fall asleep anywhere, and he usually did. Often when we’d go out to eat, he’d spend the entire meal trying to explore whichever patio we were on, usually getting his leash tangled up between the table and chairs. Like clockwork though, as soon as the check came, he’d lay down and fall asleep.

Everywhere we went, Jack loved to stop and smell the flowers. He moved at his own pace, regardless of whether or not we were in a hurry. He took up far more of the couch than a dog his size should have. He had a flair for the dramatic, doing things like trying to jump into my uncle’s boat as it left the dock, and dropping into the lake, causing me to jump in to save him, destroying one iPhone in the process. 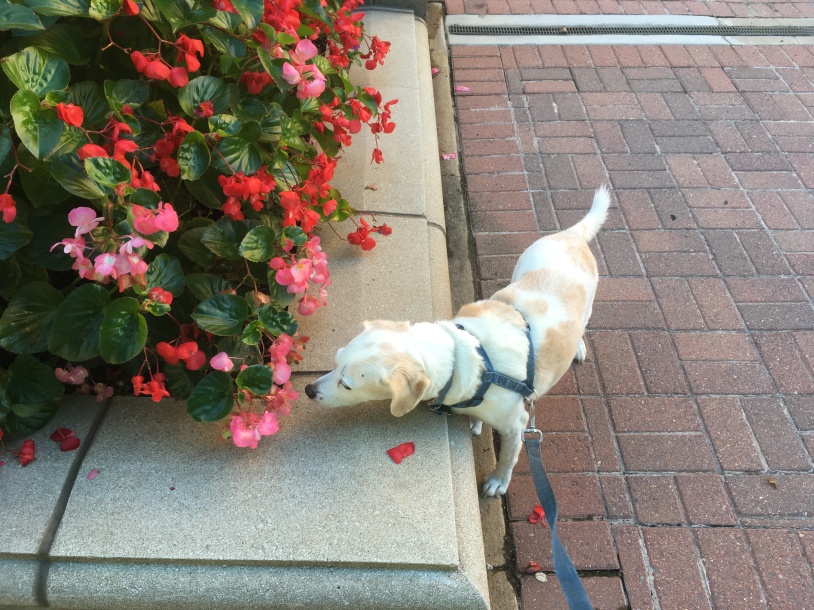 I could write countless stories about my years with Jack but suffice it to say that Jack was the best. He made friends everywhere he went. To know him was to love him. He was sweet, affectionate, and hilarious. He tolerated screaming babies, crazy puppies, and aggressively curious children without ever harming a soul. He was the best ring bearer ever. We miss him terribly but we’re so lucky to have years of memories to think back on. Rest in Peace chipilinchis, I hope there’s tons of lovely flowers in doggie heaven. 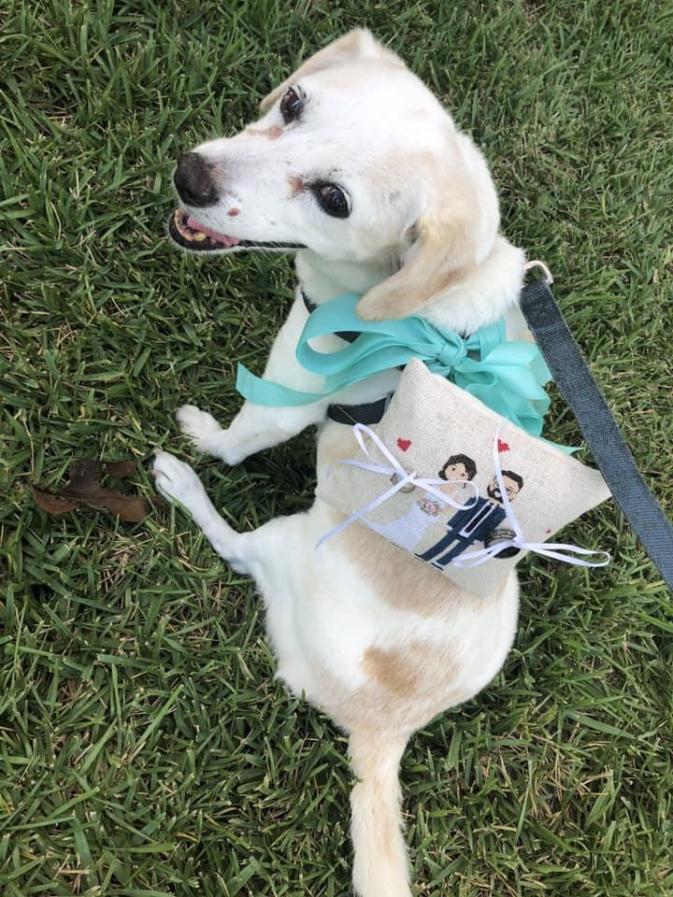